What is Konjac Sponge?

The Konjac Sponge is made from the root of the plant known in Japan as konnyaku (in Korea it is called gonyak, in Chinese referred as pinyin). Rich in minerals, the Koreans and Japanese have been experiencing the benefits of this plant for over 1,500 years, using it for consumption and for its gentle cleansing abilities. The sponge has been used in Japan for about a century for babies’ skin, but they’ve only started to be known around the world in recent years. Konjac fiber has the ability to absorb a lot of water which creates this bouncy and rubbery texture of the konjac sponge. Because of it's softness and finer textures, the Konjac Sponge is very gentle and safe to use even on sensitive skins. It is widely used all over the world now as the best face exfoliator for mature skin, sensitive skin, dry skin and even blemish-prone skins.

Why Use Konjac Sponge?

1. NATURE BASED PRODUCT
For thousands of years, the Konjac plant itself have been used and recognized for it's medicinal and healing properties. Mostly used for consumptions, it is enriched with vitamins A, B, C, D and E. When it is dried and transformed into sponge, it effectively cleanses and rejuvenates our skin immediately. As it works well for babies, it is naturally suitable for any type of skins, regardless of gender and age.
2. REFRESHED & RADIANT FOR ALL TYPE OF SKINS
When we use Konjac Sponge regularly, it will help in giving that refreshed and glowing complexion that looks natural. It cleanses our skin without affecting the cells hence is excellent for even sensitive skins.

3. EFFECTIVE FOR MAKEUP REMOVALS
Konjac Sponge is definitely one of the best ways to remove makeups (if not the best). It can easily wipe off any makeup traces on our face and gives a clean, refreshed feeling once we're done.

4. CLEANSING EFFORTLESSLY
The natural fibers in Konjac Sponge have the abilities to unclog pores, treat acne and cleanses skin of whiteheads, blackheads and other blemishes. It is practical, easy and fast.

5. COST SAVING
The Konjac Sponge is an alternative to makeup removers, cleansers, toners etc. Apart from cleansing, it help radiates the skin with its medicinal properties at a very reasonable price. 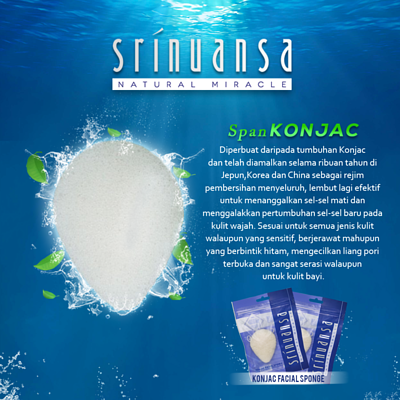